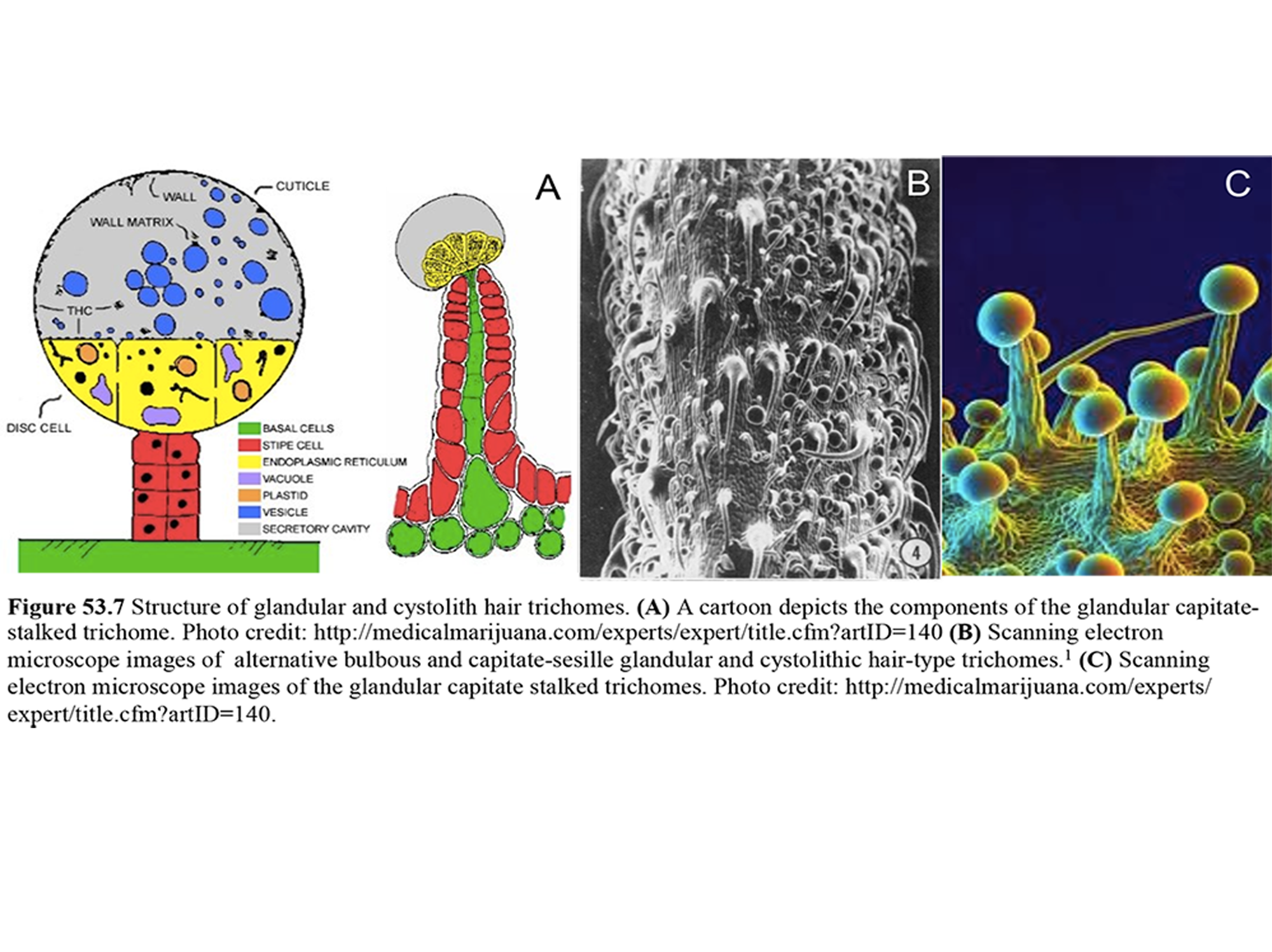 The biosynthesis of terpenes and cannabinoids occurs within the extracellular secretory cavity, referred to as a trichome. Trichomes are present on over 300 plants,(Dayanandan & Kaufman, 1976) and over 300 morphologically distinct trichomes have been reported (Wagner, 1991). The TrichOME project (www.planttrichome.org) is a database of EST sequences, microarray hybridizations, mass spectrometry-based metabolite profiles, and literature compiled with funding from the NSF and The Samuel Roberts Nobel Foundation ("TrichOME - A Comparative Omics Database for Plant Tichome," 2014). Trichomes serve several functions in plants that include keeping the frost from the surface cells, reducing transpiration from occurring, and increasing light reflectance in desert species. Specialized glandular trichomes produce and emit compounds that interact with insects deterring pests or promoting pollination (Wagner, 1991). The trichomes act as a first line of defense to protect the plant from the environment (Taura et al., 2007). Interestingly, some of the very cannabinoids (THCA and CBGA) produced within the C. sativa trichome have been found to be toxic to C. sativa cells (Sirikantaramas et al., 2005). Cannabinoids are secreted into the trichome in order to prevent cellular damage to the plant. THCA and CBGA have been shown to be toxic to certain insect species as well (Taura et al., 2007).

The term trichome is derived from the Greek word meaning hair, because of the hair-like appearance. Trichomes found on C. sativa have been divided into two types, glandular and non-glandular. Non-glandular C. sativatrichomes cover the shoot from early seedling stages to the end of flowering and are highly-silicified unicellular hair-like appendages (Dayanandan & Kaufman, 1976). Cystolithic non-glandular trichomes are short hairs ranging from 150 – 220 µm in height, and contain basal deposits of calcium carbonate. In contrast, non-cystolithic non-glandular are generally longer (340 – 500 µm) with a more slender structure, and do not contain a basal deposit of calcium carbonate (Upton et al., 2014). The non-glandular trichomes cover the majority of the plants surface, including the stems, petioles, stipules, leaf blades, bracts, and both surfaces of the tepals (Dayanandan & Kaufman, 1976).

The cannabinoid precursors, olivetolic acid and geranyl diphosphate are transported through the stalk of glandular trichomes via vacuoles and plastids respectively (Figure 7A). The cannabinoid precursors are released into the secretory cavity where they are transformed biosynthetically through resident cannabinoid synthase enzymes in the extracellular space, which was shown in Figure 4. Monoterpenes are formed in the plastids via the enzymatic conversion of geranyl diphosphate. Alternatively, geranyl diphosphate can couple with isopentenyl diphosphate in the cytoplasm to form the parent compound to the sesquiterpenoids, farnesyl pyrophosphate (Russo, 2011). THCA synthase-fused to green fluorescent protein helped visually demonstrate that this enzyme is accumulated in the secretory cavity (Sirikantaramas et al., 2005) located in the head of glandular capitate-stalked and capitate sesille trichomes (Figure 7C). 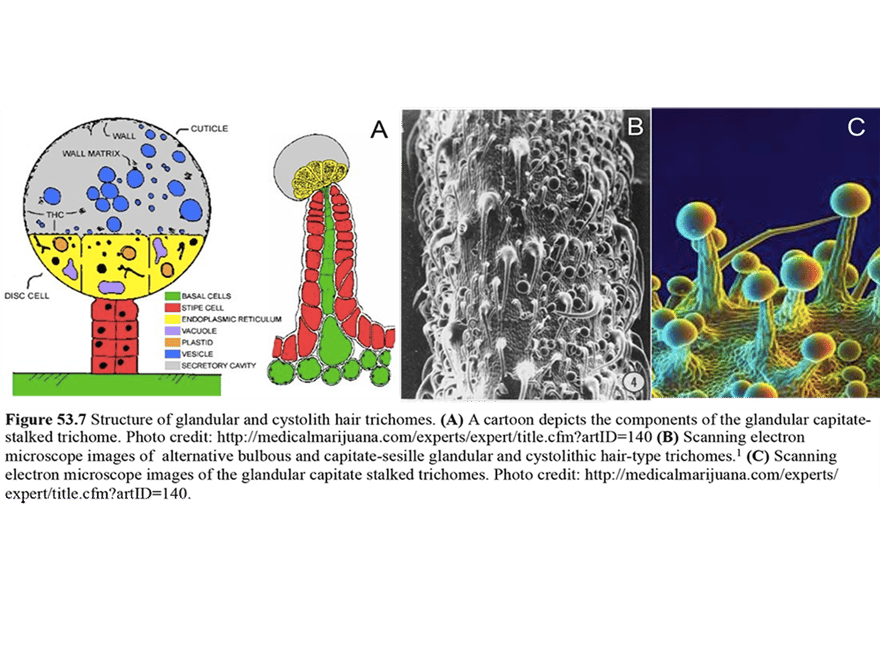